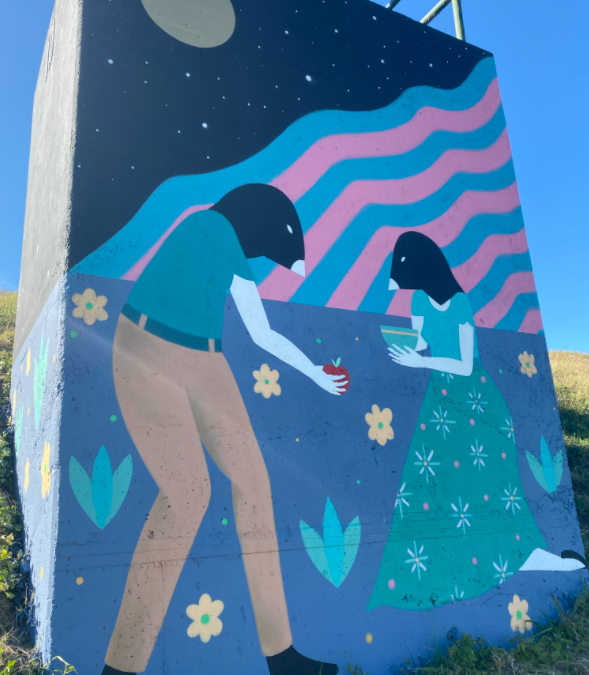 Title of Work: Giving and Receiving

The moon looms through much of Adrian Brooks’ work.

Drawn in phases, the moon – sometimes crescent, sometimes full – adds a luminescence to his art as he tries to create another world  that includes bird-head figures instead of people.

Often there are waves of color, what Brooks refers to as “cosmic waves.”

Originally from Houston, Brooks studied at the San Francisco Art Institute and is greatly influenced by what is called the “Mission School” art movement of the late 1980s and early 1990s that started in the Bay area. These artists draw their inspiration from the urban landscape, weaving in elements of graffiti and folk art and craft.

In “Giving and Receiving” Brooks builds on his trademark “visionary language.”

On the riverfront panel is the moon and a sky full of stars hanging over two bird-headed figures exchanging gifts – the male figure holds an apple; the female presents him with a bowl. Seeming to grow from the ground are colorful cosmic waves that wrap around one side of the structure.

The bird-head representative figures, which Brooks said are unconsciously influenced by Native American art, are involved in the “simple act of giving and receiving and sharing.”

Brooks sees his Trinity Trails piece as part of a bigger vision.

“My primary intention is to show universal themes of love, loss and redemption – subjects that transcend race, creed; worlds too far away to resemble one place; and sacred rituals that could be part of any culture,” Brooks said.

Next time you’re out on the trails, keep your eyes open for the colorful creations popping up along the river. You can also follow @TrinityTrails on Instagram to see more pictures of completed and in-progress structures!

Are you interested in staying connected with the Painting the River project? Sign-up for our newsletter and learn about new murals and the project each week.